After the phenomenal success of BRICK last year, the UK’s biggest immersive LEGO experience returns to
London’s Excel in December bigger and better that ever with a humungous array of fun experiences for fans of LEGO of all ages.
BRICK 2015 is a LEGO lover’s playground with over 3 million LEGO bricks to play with. Stacked up, that would be 93 times the height of The Shard. 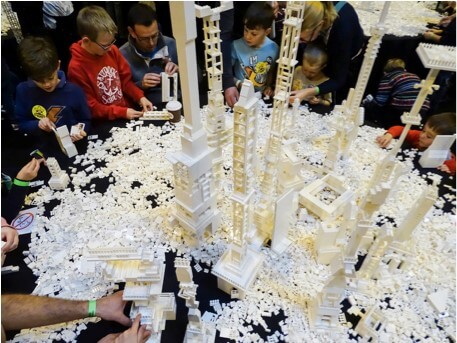 Brick fans will have the opportunity to rub shoulders with colossal LEGO versions of their heroes including Harry Potter’s Hagrid, Avenger’s Hulkbuster, Teenage Mutant Ninja Turtles, three Hobbit figures, Chima, Lord Of The Ring’s Gandalf, and many more. These LEGO creations are huge and Hulk Buster took six professional builders over 960 hours to assemble. The sculpture weighs in at just over 907 kilos and is over 8 foot tall and 2.1m wide.
Last year block heads broke 5 Guinness World Records at BRICK and this year the team intend to build on that achievement so ensure you’re there to make BRICK history.
With BRICK falling one week before the release of the brand new Star Wars: Episode VII – The Force Awakens film, BRICK visitors will get the chance to see classic Star Wars characters and vehicles recreated in incredible fan builds and Toys R Us will be on hand offering the opportunity to purchase the huge new collection of Star Wars LEGO.
Coming from all corners of the UK and beyond, the Fan Zone will be home to builders from Norway to the USA displaying their amazing rockets, London landmarks, film scenes including Jurassic Park, football stadiums, skyscrapers, incredible mosaics and much more!

Don’t miss your chance to get involved with some of our highlights:
•    Immerse yourself in our BRICK pits and let your inner master LEGO builder come out!
•    See London’s landmarks with huge fan builds of Her Majesty’s Theatre, Selfridges, The Shard, London Bridge, London City Airport and more
•    Build and display your creations in the brand new Purple Brick Pit and showcase your talent for all to see
•    Enormous creations from Bright Bricks including their record breaking Woolly Mammoth alongside the Titanic and a life size Caravan complete with running water
•    Maico Arts is bringing an even bigger Great Ball Contraption to London this year.  Last year’s 88 modules was a Guinness World Record and there will be over 100 modules at BRICK 2015
•    New for 2015 – Huge LEGO statues featuring characters from Harry Potter, Lord Of The Rings, Ninja Turtles, The LEGO Movie and more!
•    Head to the Toys R Us stand to buy new Star Wars 7 LEGO sets in time for Christmas alongside an array of new release from the biggest TV and movie franchises
•    Take part in Guinness World Record attempts. Last year we broke 5 Guinness World Records at BRICK and we intend to break even more this year!
•    Over 125 Incredible fan displays bought to BRICK 2015 from all over Europe – many never seen before in the UK!
•    Build Britain – brick by brick,  build you own piece of Britain and put it on the UK’s largest LEGO Map
•    Movie Zone with clips from Ninjago, LEGO Batman and more.
•    The LEGO Museum offering a snapshot of the LEGO through the years from early wooden toys to the first plastic versions of the beloved brick
•    Join in and create a mammoth LEGO mosaic!
•    Dance Zone – dance along with LEGO Friends
•    Meet Studley the BRICK 2015 mascot.
With ticket demand high and last year selling out, BRICK and LEGO fans are advised to snap up their tickets now at http://brickshowslive.com/.

This author has not added a biography. Meanwhile Event Publicity Team has contributed 65 posts. Click here to view them.