Warner Brothers Studio Tour London provides an amazing opportunity to explore the magic of the Harry Potter™ films – the most successful film series of all time. This unique walking tour takes you behind-the-scenes and showcases a huge array of beautiful sets, costumes and props. It also reveals some closely guarded secrets, including facts about the special effects and animatronics that made these films so hugely popular all over the world.

Showcasing the best in British filmmaking and revealing some closely guarded production secrets, the Warner Bros. Studio Tour London is a wizardly delight for all the family! You can take a stroll through Privet Drive, wander down Diagon Alley and hop on Hagrid’s bike during the tour. Visitors also have the option to buy a famous cup of butterbeer!

Warner Bros. Studio Tour now features a recreation of Platform 9 ¾ and the original Hogwarts Express steam engine. This permanent exhibit gives visitors the chance to climb aboard the train’s carriage and pose with a luggage trolley as it disappears through the platform wall. Scenes featuring the working train were shot at the Studios, including the iconic last scene in which grown up Harry, Ron and Hermione wave their own children off to Hogwarts as they leave for school.

The Forbidden Forest may be strictly off-limits to Hogwarts students, but for the first time this March, visitors to Warner Bros. Studio Tour London – The Making of Harry Potter are invited to defy Professor Dumbledore’s orders and follow the footsteps of Harry, Ron and Hermione deep into the grounds of the Forbidden Forest.

Home to an abundance of creatures, the Forbidden Forest offers shelter and protection to Hippogriffs and Acromantula among many others. It is also well known to beloved half-giant Hagrid in his role as Care of Magical Creatures professor. One of Rubeus Hagrid’s original costumes will be on display, lantern in hand, to welcome visitors through the Hogwarts Gates deep into the forest. Filled with 19 trees each with a diameter of over 12 feet, visitors will walk beneath the giant entwined roots on their journey and will even be able to control the weather using the same techniques created by filmmakers.

Amongst the imposing trees, visitors will encounter a full size model of Buckbeak,which is new to the tour, and have the opportunity to bow to the majestic creature.  They will see up close the incredible detail and craftsmanship that went into creating the magnificent Hippogriff. Each feather had to be individually inserted and glued by the Creature Effects team who were busy adding feathers right up until the final moment Buckbeak was needed on set for Harry Potter and the Prisoner of Azkaban.

·         Learn how creatures were brought to life with green screen effects, animatronics and life-sized models

·         Redescover other memorable sets the film series, including the Gryffindor common room, the boy’s dormitory, Hagrid’s hut, Snape’s Potion’s classroom and Professor Umbridge’s office at the Ministry of Magic

·         Delve into the Dark Arts: see the Malfoy Manor fireplace and table around Bellatrix Lestrange, the Malfoy family, the Death Eaters and Voldermort sat plus a 20-foot model of Voldermort’s snake Nagini! 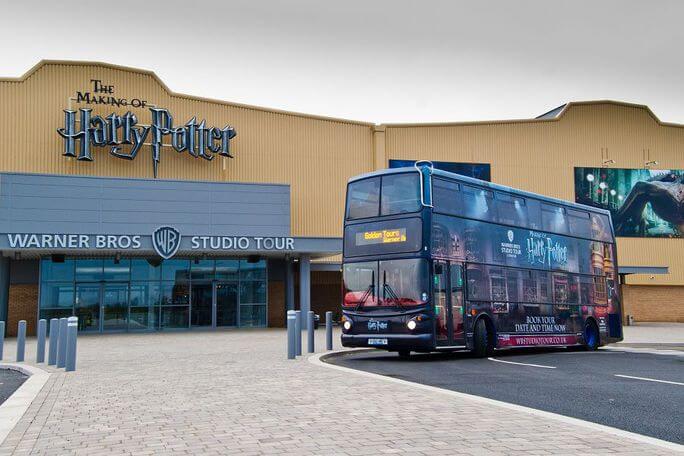